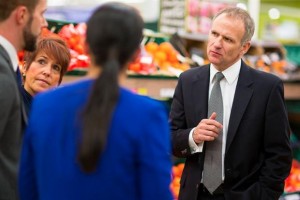 Dave Lewis is taking Tesco back to its roots and green shoots are starting to appear despite today’s tumble in profits argues retail, customer insight and loyalty expert Marie Anderson, director at Maran Consulting.

I have said it before and I will say it again: it’s a tough time to be a grocer. This means it’s an even tougher time to be Tesco. Accounting scandals, share price falls, restructures, price wars, discounters, changing shopper behaviour, declining margins, national living wage… Dave Lewis hasn’t exactly had a honeymoon period in his new role.

So unsurprisingly, Tesco’s first half results today are a far cry from the results of years gone by. Profits have more than halved versus last year’s first half, and sales are down 1.1%.

But one year on from the arrival of Messrs Lewis and Stewart, there are a few green shoots. Sales decline is slowing, with volumes and transactions increasing. This is partly due to a recovery in customer confidence (Sainsbury’s showed growth in these areas last month too), but it’s also a result of a fundamental reset in the way Tesco does business. Tighter focus, a healthier balance sheet, range resets, improved service and availability, simpler payment terms for suppliers, restructured teams and cultural change.

There’s a mountain to climb, but it seems like Tesco has definitely now left base camp.

What’s most encouraging, however, is that Dave seems to be taking Tesco back to its roots: focusing on customers. Customers are “our magnetic north” he said at yesterday’s IGD Big Debate, and as a former Tesco (dunnhumby) colleague, this makes my heart sing.

In the mid ‘00s we all knew what we were doing. We knew that every little helped. We lived the value “nobody tries harder for customers”. Our job was to make stores “better for customers, simpler for staff, cheaper for Tesco”. It wasn’t that the values were wrong – and recent colleague feedback to the new leadership team backs this up – yet in the years the intervened, it felt like Tesco had lost sight of these values.

Dave Lewis said yesterday at the IGD: “We lost the virtuous circle. We focused on margin, not customers. We made some bad choices.” For me, this got to the heart of the matter – it felt from the outside that the famous 5.2% profit margin stopped being one of the indicators of Tesco doing a great job and became their raison d’être.

Now it feels like things are getting back on track for customers. Those big, hard-to-shop ranges are being trimmed by c.15% as part of Project Reset. Availability is improving – with more space for multiple facings so that colleagues aren’t constantly running back and forth from stock room to shelf edge to make sure customers can get the products they want.

Prices are lower (though perhaps not yet low enough) as customers have spoken, they want cheaper, more transparent pricing, with less reliance on the ‘smoke and mirrors’ of promotions.  Internal teams and external agencies have been changed to deliver this renewed focus on customers, with BBH brought in to reboot the way that Tesco communicates with its customers.

However, all is not plain sailing. The market is still tough and margins are tighter than ever. Customers are much less loyal and no longer make those lovely big-trolley shops of old. Amazon Fresh is snapping at Tesco’s heels, and the discounters are extending their reach.

Even the mighty Tesco Clubcard is now one amongst many in the grocery arena. Performance in big stores like Extras is improving, but still running negative, and the fundamental question of what to do with these big shed stores in a market shifting to online and convenience remains.

Lewis announced today that Tesco’s new purpose is “serving Britain’s shoppers a little better every day”. This is a sensible goal as he continues to steady the ship; one that stores and head office colleagues can easily apply in their day to day.  However, this alone is unlikely to be enough to make Tesco great again.

Dave says that he has gone back and put the customer at the heart of everything Tesco does. And to this I say “at last”. But I wonder, in this turbulent market, what comes next for Tesco?

Marie Anderson is a retail, customer insight and loyalty expert, and Director at maran www.maran.consulting

This article was first published in Marketing Magazine on 7th October 2015.